Below is a list of the main marine organisms that inhabit the Secche. The list is constantly updated. 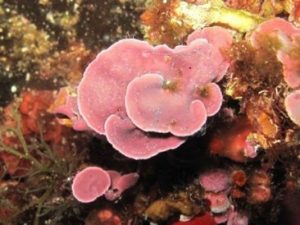 Distribution: a sciaphilous species common in the infra- and circalittoral zones, which contributes to the formation of coralligenous bioconcretions. It is found in the Mediterranean and eastern Atlantic (from Spain to Senegal). 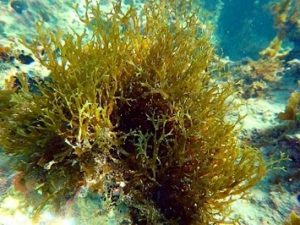 Morphology: flattened thallus and dichotomous branching. The branches are rounded at the ends. The colour varies from brown to green.

Distribution: rocky seabed, from the surface to a depth of 30 m. Common in well-lit areas of the infralittoral. It can be epiphytic, i.e. attached to other algae. 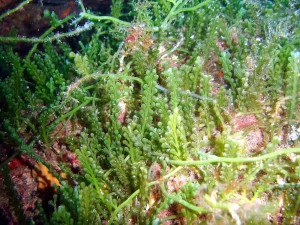 Morphology and Distribution: it is a green alga. It has a thallus, the vegetative body of the alga, consisting of a creeping stolon from which numerous branched, root-like rhizoids branch off, allowing anchorage in the substrate and absorption of nutrients. Its peculiarity is the presence of smaller, club-shaped, green erect parts, the “fronds”, known as phyllodes. The alga consists of a single large cell. It lives on shallow sandy and muddy seabeds, but can also be found on “mattes” of dead Posidonia. It is native to the Red Sea (Lessepsian species) and was first reported in the Mediterranean in 1950. It is a nuisance species, whose introduction into the Mediterranean is clearly correlated with the opening of the Suez Canal. C. racemosa is also able to occupy space three-dimensionally, with serious consequences for other plant species; indeed, its fronds constitute a real light screen for other algal species.

Reproduction: Caulerpa racemosa has well-defined seasonal dynamics. The most intense phase of vegetative activity occurs in the period between summer and autumn, when the algae create an intricate network that often covers vast areas; between December and April, growth slows down, the thalli are mostly isolated and the phyllodes reduce in size and number. However, the stolons remain adherent to the substrate and the competitive power of the algae does not change, remaining high. Growth resumes rapidly at the beginning of the next warm season.

Distribuzione: this nuisance alga is ubiquitous and due to its highly invasive dynamics, it has been able to colonise various types of environment: photophilic and sciaphilic environments, hard substrates and dead matte of Posidonia oceanica. It is now widespread in many parts of the central-eastern area including the coastlines of Sicily, but its distribution area appears to be expanding so much that it has even been reported in the Ligurian Sea.

Morphology: a green alga with lanceolate leaf-like fronds, 15 cm long and 1.3 cm wide, connected by stolon-like plant structures. It is a perennial alga with seasonal development, the stolon remains in winter while the fronds fall off to regrow in spring.

Distribution: on mainly sandy seabeds at a depth of between 1 and 20 m, it prefers warmer waters. Present in the Mediterranean, Black Sea, North-East Atlantic (Canary Islands and southern Spain) and North-West Atlantic (Caribbean).

Interesting fact: unlike Caulerpa taxifolia and C. racemosa var. cylindracea, C. prolifera is not an invasive species but is the oldest of the Caulerpa genus present in the Mediterranean. 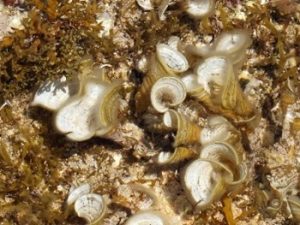 Morphology: thallus 5–10 cm high, laminar, expanded and funnel-shaped, reminiscent of the open fan-shaped tail of a peacock, hence the name. The colouration is whitish, due to the accumulation of calcium carbonate that is fixed in the tissues, with yellowish-brown transverse banding, where the reproductive organs develop and tufts of hair-like structures are visible.

Distribution: a photophilic alga (colonises well-lit hard substrates) of the infralittoral. It is a cosmopolitan species found from the surface down to a depth of about 20 m. 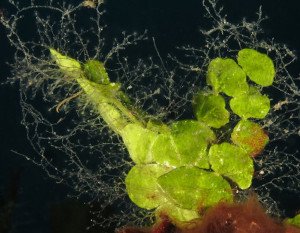 Morphology: a green alga covered to a greater or lesser extent by epiphytes and calcification. The thallus is attached by rhizoids (root-like structures) to the substrate. The alga has a dichotomous branched structure in a single plane where the individual articles are flattened and overlapping, discoidal in shape and slightly calcified. The diameter of the discs varies from 5 to 25 mm with a thickness of about 1 mm.

Distribution: a sciaphilous alga that colonises hard substrates from a depth of a few metres to about 70–80 m. It lives in the same biotope as Flabellia petiolata. It is found in all the warm seas, in the Mediterranean and along some coastlines bordering the Atlantic, Indian and Pacific Oceans. 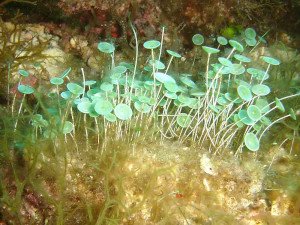 Morphology: unicellular alga. The stem (approx. 5 cm long) and the rhizoidal part are perennial, while the calcified, rayed parasol (approximately 1 cm in diameter), disappears during the winter to regenerate each year in the spring. This pale green whitish alga is therefore visible only in late spring and summer. The rayed parasol consists of small, interconnected sacs containing the reproductive elements of the alga.

Reproduction: in late summer, the gamete-filled sacs are detached and the gametes are released into the water. Male and female gametes meet in the water and give rise to a new cell that, if it falls onto the suitable substrate, gives rise to a new adult unicellular alga. 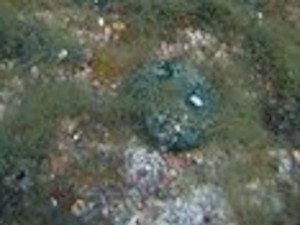 Morphology: when young, the thallus has an almost spherical shape, green and hairy on the surface, which changes as it grows. The interior is hollow and criss-crossed by a series of filaments that give the structure a spongy texture.

Distribution: photophilic species living at a depth of 1 to 50 m. It is found on solid substrates, usually on rocks, and is present all year round. Mediterranean, Atlantic, English Channel and North Sea. 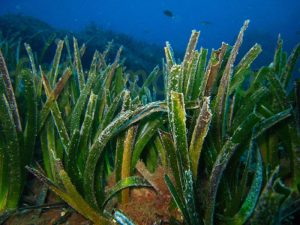 Morphology: it is a higher plant, consisting of rhizome, leaves, flowers and fruit. Its rhizomes, which can grow both vertically and horizontally, intertwine tightly with each other, forming, with the sediment trapped by the leaves, a kind of underwater terraces, known as “mattes”, up to several decimetres high. The meadows play a fundamental role in the ecosystem of the Mediterranean basin and constitute a real habitat, a description of which can be found in the habitat section.

Distribution: this marine phanerogam is mostly found on shifting (muddy and sandy) seabeds. It forms extensive meadows between the surface and a depth of 40 metres. Endemic to the Mediterranean, it occupies an area of around 3% of the entire basin (corresponding to an area of around 38,000 km2), representing a key species of the coastal marine ecosystem in the Mediterranean.

Reproduction: occurs both sexually and asexually. In sexual reproduction, hermaphrodite flowers are produced, grouped in a herringbone-shaped inflorescence. Pollination is hydrophilic, resulting in the formation of fruits (sea olives) that, once ripe, detach and, due to the oily substances they contain, float until they release the seed, which falls to the seabed. Then, having found the optimal conditions, a new plant develops from the seed. Asexual reproduction occurs by stolons, through the production of rhizomes that occupy the empty spaces, expanding the meadow. The life of Posidonia is strongly influenced by the degree of salinity of the water in which it lives, the presence of a sandy seabed and the amount of light to which it is exposed.

Interesting fact: in the Mediterranean, we are witnessing a gradual regression of the meadows due to various factors: (1) competition with invasive allochthonous algae, Caulerpa racemosa var. cylindracea and Caulerpa taxifolia; (2) the uncontrolled development of the shoreline; (3) pollution; (4) the damaging effects of trawl nets; (5) anchoring; etc. These factors damage P. oceanica meadows, with highly destabilising effects on the balance of the entire marine ecosystem.
In the Secche della Meloria MPA, P. oceanica meadows extend over a large part of the territory and, due to their role in the ecosystem, require special protection (priority habitat in Annex 1 of the EU Habitats Directive – Dir. No. 92/43/EEC). 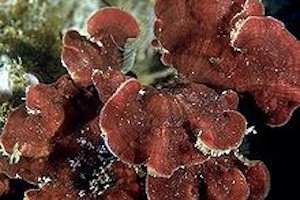 Morphology: the orange-red to brick-red thallus develops horizontally in a fan shape, resembling the shape of a rose, from which it takes its common name in Italian (Rosa di mare).

Distribution: a sciaphilous species, it is found attached to stones or calcareous algae in very shady areas such as caves or crevices in the infralittoral. Present both on the surface and at depths of up to 50 m, in the Mediterranean and the near Atlantic. 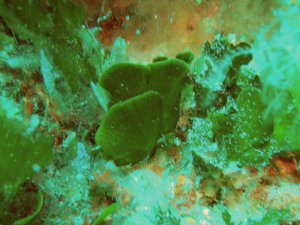 Morphology: fan-shaped green alga with laminae approximately 10 cm in diameter. The laminae are attached to the substrate by a stalk. The thallus is fibrous and in adult individuals is often covered by epiphytes. It is also a food source for small molluscs and is found in isolation or in small groups.

Distribution: is found in the same biotopes as Halimeda tuna, present all year round on rocky, sciaphilous substrates, from a few metres below the surface to depths of about 60 m. It becomes photophilic in the warmer summer months.