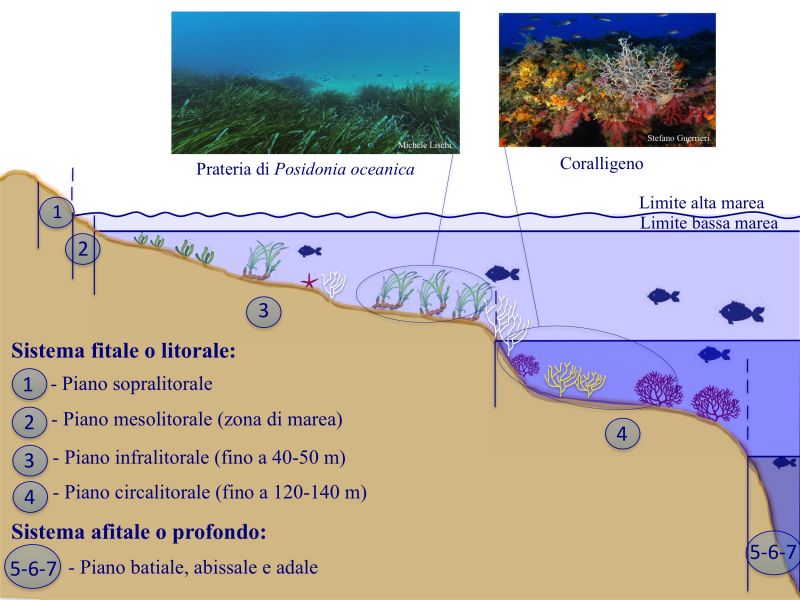 Although characterised by the rocky shoal, the seabed of this marine area is heterogeneous – full of ravines, escarpments, deposits and depressions, and therefore rich in biodiversity. It is also characterised by the presence of extensive Posidonia oceanica meadows that cover almost the entire surface of the area down to a depth of 20–25 metres, where they are gradually replaced by extensive coral reefs dominated by white gorgonian (Eunicella singularis), which in turn slope down to sandy seabeds featuring the benthic communities of the deeper marine environments typical of coastal detritus.

The Secche della Meloria therefore feature a consistent richness of species; indeed, its waters are home to numerous plant and animal populations. Faunal groups that can be observed in the marine environment of the Secche include: sponges, crustaceans, polychaetes, bryozoans, molluscs, tunicates, jellyfish, actinias, corals, starfish, and all the main species of fish found in the demersal zone, such as: damselfish, goatfishes, various species of wrasse, salema, Diplodus, East Atlantic peacock wrasse, dentex, sand steenbras, scorpionfish and syngnathids, as well as the largest and most representative species such as moray eels and the rarest ones such as the dusky grouper. 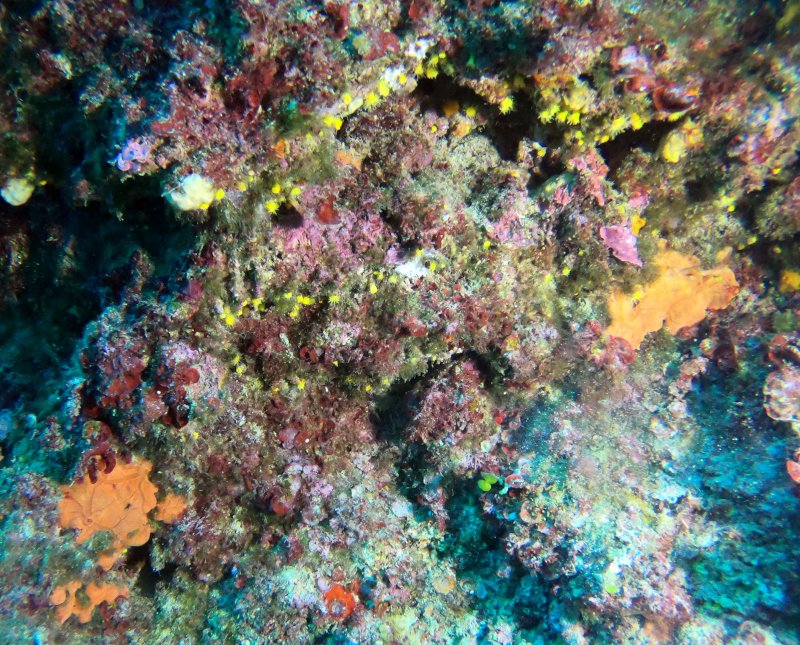 The main depressions in this shoal are known as the “Catini” (“Basins”). These distinctive formations probably originated as a result of erosion in distant geological eras, and represent a small marine ecosystem unique to the Mediterranean, containing rare micro-organisms that are sometimes found only here. Probably originating from karst phenomena, they may have developed during the last glacial phase in an onshore coastal environment subjected to weathering. This continental morphology appears to have been subsequently submerged, and in the Holocene, during the last rise in sea level, formed a support for the present-day organogenic concretions that inherited the pre-existing morphology. They were called “basins” by the local fishermen and are in fact made up of distinctive circular depressions. As they occur in large numbers rather than merely occasional depressions, they can be considered a habitat in their own right, with typical infralittoral populations.

The formation of the seabed of the Secche della Meloria is very complex indeed. There is good general information on its geology, but there are not many studies in the literature that can provide detailed information, as no precise sampling has been carried out in the area of the shoals. However, as early as the 1950s, thanks to Segre’s pioneering work, a reasonably clear picture of the seabed was obtained, indicating the probable courses of numerous river beds submerged by the last sea-level rise (Holocene period), highlighting various sedimentary accumulations of the fluvial transport of the ancient littoral along the outer edges of the Secche. Studies by Fierro et al. in the late 1960s reported the presence of circular and sub-circular indentations in the area of the shoals, which local fishermen commonly referred to as “basins”. Subsequently, studies were carried out on these distinctive habitats, peculiar to the Secche della Meloria. In more recent years (De Biasi and Gai – 2000), an interesting paper accompanied by a chart of the “Basins” of the Secche della Meloria has been published. This study made it possible to identify, for the first time, the number and spatial distribution of the “basins”, defined as pseudo-circular depressions, which, due to their size and distribution, cannot be considered occasional depressions, but true habitats in their own right. In 2011, the work of Casarosa et al. contributed to clarifying some aspects on the morphology of the Secche della Meloria and provided a new geomorphological and bathymetric chart of the area: the basins were studied in greater detail, concluding that the karstic hypothesis is probable as regards their formation. Within them are special micro-habitats with specific and sometimes unique biological formations; the faces form almost vertical, or sometimes sub-vertical banks, while on the bed, there are accumulations of sediment consisting mainly of coarse carbonate sands of organogenic origin, which are home to distinctive and unique fauna, especially in terms of micro-organisms.

The “basins” thus constitute a unique mosaic of ecosystems that can only be found in the Secche della Meloria. Each “basin” differs from the others in terms of the morphology of the faces, the sediment on the bed and variability in depth. The only common element is that they are all found on rocky substrates, whether bare or colonised by Posidonia oceanica. The morphological heterogeneity of the “basins” is reflected in the variability of the associated population. This is dominated by typically photophilic algae of the upper infralittoral, such as Padina pavonica, Acetabularia acetabulum and Codium bursa, which colonise the walls directly exposed to light, or by hemisciaphilic animal species, such as some sponges, or sciaphilic species such as Parazoanthus axinellae accompanied by Peyssonneliaceae. 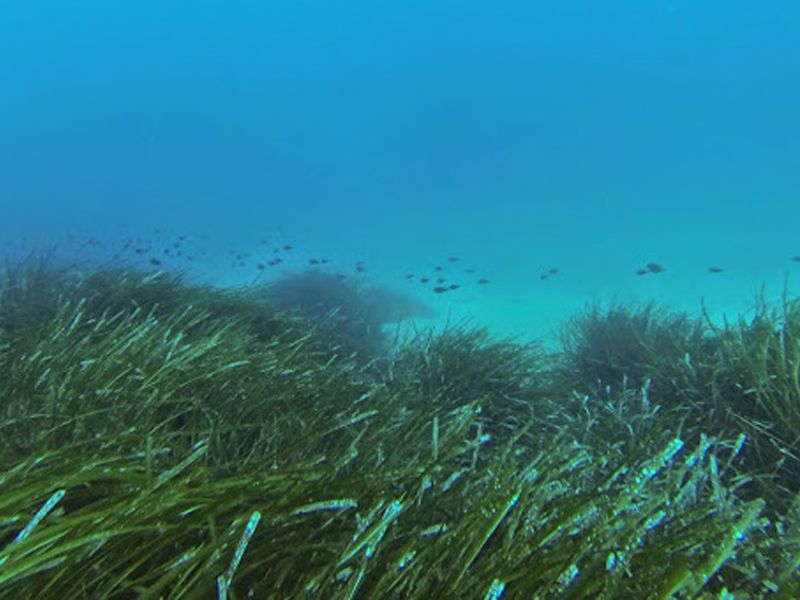 In terms of plant populations, the most important habitat are the meadows of Posidonia oceanica (a real plant that grows under water and not a type of algae!). This habitat, which is a priority habitat recognised as being of European value by EU directives on the protection of ecosystems, is undoubtedly the largest by surface area in the entire MPA and represents a very complex and well-structured biocoenosis with highly biologically variable communities. The meadow, in compact or sparse form, occupies almost all the flat or semi-flat beds of the shoal: established either directly on banks of rock with detrital deposits, on bio-concretions or even on matte (i.e. the agglomerated layer of dead pieces of posidonia that often forms a real barrier of organic plant material). Posidonia performs several primary environmental functions for the survival of the entire marine area; considered a real oxygen “factory” capable of regenerating and purifying sea water, it constitutes an important natural belt against the erosive action of currents and swell, and forms a nursery for fish populations, providing shelter and food for eggs and fry. The posidonia meadows also provide a living environment for much of the marine microfauna that inhabit the shoal. The faunal communities that live this habitat include crustaceans, crabs, worms, bryozoans, octopuses, nudibranch molluscs, tunicates, jellyfish, actinias, starfish. Fish species include goatfishes, Diplodus, damselfish, scorpionfish, greater pipefish and seahorses, as well as the important Pinna nobilis – the largest bivalve mollusc in the Mediterranean, which is now seriously threatened by an allochthonous parasite that is putting this native species of our seas at risk of extinction.

Posidonia, as mentioned, is not an alga, but a higher plant that produces flowers and fruits. Posidonia meadows are a priority habitat protected by the EU Habitats Directive. Posidonia oceanica is a marine plant found exclusively in the Mediterranean, meadows constitute one of the most productive ecosystems in our sea. These meadows perform several important functions in the marine ecosystem:

Their range has been threatened since modern times, and still is, by several factors all related to human activity, the main ones being:

As well as being classified as a priority habitat by current legislation (Directive 92/43/EEC of 21 May 1992 and the ensuing national legislation), Posidonia oceanica meadows are also subject to protection by the following International Conventions on the Conservation of Biodiversity in the Mediterranean:

The main escarpments of the shoal, along with the banks adjacent to them, are characterised by the second major habitat of the Secche della Meloria: the coralligenous. This environment is also of high natural importance, although it has not yet been included in the list of “priority habitats” under the Habitats Directive. Indeed, the coralligenous is a complex of biocoenoses rich in biodiversity that form a landscape of sciaphilous (i.e. not very fond of sunlight) animal and plant organisms with a concretion of calcareous algae. In Meloria, a distinction can be made between a coralligenous wall habitat and one more characteristic of calcareous platforms, which are nonetheless rich in depressions and rough surfaces.

The coralligenous system in Meloria is part of the coral formations of the Mediterranean (which differ from those of tropical reefs) and consists of coralline algae with calcareous thallus, whose skeletons, in combination with other sessile organisms (which attach themselves to the substrate), give rise to bio-constructions attached to the rocky substrate. These are sometimes large and are of great ecological importance. These algae colonise a habitat (in this case the rocky walls) and modify it to such an extent that it becomes another habitat, thus creating new conditions for both sessile and moderately vagile fauna, which can occupy the inner recesses of the concretion. This habitat is generally found at a depth of between 25 and 50 metres, mainly in low-light areas. Organisms with a carbonate skeleton play a significant role in structuring this habitat: foraminifera, bryozoans, serpulids, madrepores, gorgonians, sponges, crustaceans and bivalves contribute to the formation and complexity of the habitat. This biocenosis has very specific needs, such as low light, a low and relatively constant temperature, uniform salinity, weak hydrodynamics and a moderate sedimentation rate. Much of the structure is formed by the concretion of dead thalli of algae of the Corallinaceae family, of which Eunicella singularis is the most common, which accumulate in various layers. Living algae, which require light, occupy only the surface layer. This particular habitat is characterised by high productivity and, naturally, a large accumulation of calcium carbonate.

In Meloria, the coralligenous habitat is located on the western and north-western slopes of the marine protected area, i.e. where the shoal escarpment begins and descends to the deeper seabed. Indeed, the outer edge of the shoal leads to a long coralligenous formation that actually hugs the most offshore side of the Secche, creating a striking and colourful environment, teeming with life. In this habitat, the white gorgonian (Eunicella singularis) predominates and, near the tops of the shoal known as the Tramontana and Ponente, the colourful cushions of Cladocora caespitosa can be found. This is the only Mediterranean zooxanthellate colonial scleractinia species belonging to the Faviidae family. It is in fact a form of coral capable of forming reefs (hermatypic) with large formations that are becoming increasingly rare throughout the Mediterranean basin, and is one of the largest benthic producers of carbonates, being able to form formations of a few square metres with colonies of up to over 60 cm in diameter.

The shoal’s coralligenous populations are among the most characteristic in the Mediterranean, and are important because: