The Morphology of the Secche

The Secche della Meloria are an area of shallow rocky seabeds covering an area of 35–40 square kilometres, with a shape roughly resembling that of an equilateral triangle with the vertices facing north, south and the third to the east towards the port of Livorno (Bacci et al., 1969). The main part of the shoal is located approximately 3.5 nautical miles off the coast of Livorno. The shoal consists of a rocky bank with a depth varying from a minimum of 1.5–2 metres, consisting of the actual top of the shoal surrounding the area of the old tower, to a maximum of 30 metres on the westernmost edge of the bank, where it slopes down to muddy, sandy seabeds. In the eastern part, the maximum depth of the shoals is approximately 10 metres, a depth that gradually reduces towards the Livorno coastline, from which it is separated by a channel approximately 1 km wide and 5–6 km long. The northern boundary of the shoal is formed by the Testa di Tramontana headland, in the vicinity of which is the second lighthouse on the shoal, known as “Ship-Light”. In this area, the seabed is somewhat heterogeneous and contains numerous ravines due to the alternation of rocky stretches and shifting muddy seabeds, with a depth ranging from a minimum of 8 metres to a maximum of 20–25 metres where the rocky part slopes down to a flat muddy seabed extending northwards and towards the coast. For the entire stretch that faces the marine protected area, the coastline is low-lying with sandy shores; it is characterised, moreover, by marked forms of urbanisation and anthropisation, culminating with the major infrastructure of the commercial and industrial port of Livorno. 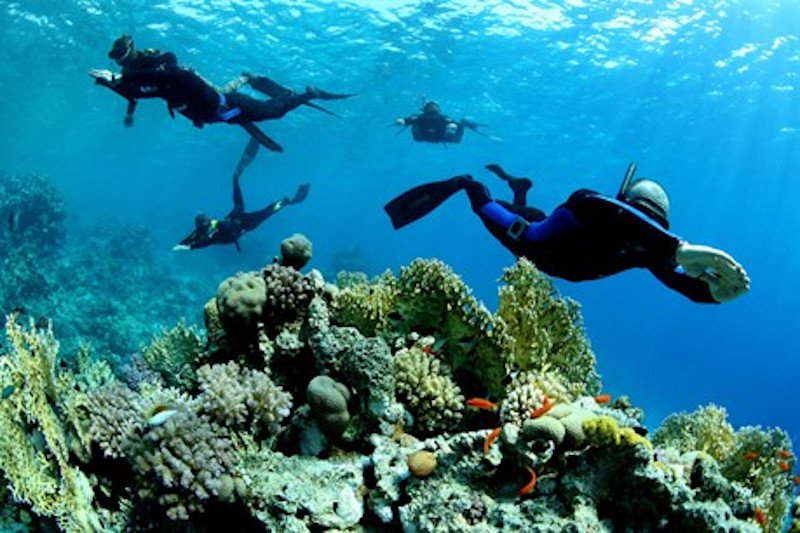 In the western part, the shoal does not slope uniformly. In its northernmost part, it extends with an underwater relief known as the Secca di Fuori. This relief rises from 17 metres to a depth of 8–9 metres and is located 5.5 km west of the Ship-Light lighthouse. In the south-western part, however, the seabed slopes down in a linear way to a depth of approximately 30–35 metres where the rocky bank ends and the sandy, muddy seabed is found. In the southern part, the rocky seabed slopes gently down to a depth of 25 metres, and as the depth increases, the rocky substrate is replaced by alternating dead matte and mud. Five kilometres from the southern tip of the shoal in a SSW direction, the seabed rises from approximately 40–45 metres to 26 metres, giving rise to a rock formation known as the “Scoglio della Madonna”. The steep drop that occurs around the 50 metre mark is considered the true morphological limit of the shoal. 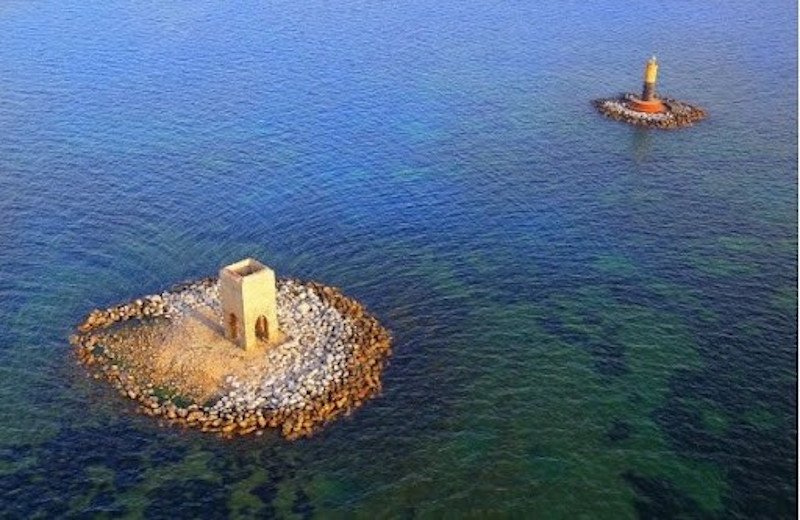 In the shallowest part of the shoal, between the Faro della Meloria and Ship-Light lighthouses, the seabed is never more than 5 metres deep. In this area, between the alignment of the two lighthouses and the part of the shoal that juts out to the west, there are some distinctive geological structures of karst origin, known as “i Catini” (the Basins). This geological phenomenon (found only in Meloria) consists of roughly circular depressions within the rocky seabed, probably formed as a result of erosion and marine ingression. The depressions vary in size and depth: from just over a metre up to 4–5 metres, and within them are special micro-habitats with specific and sometimes unique biological formations. The faces form almost vertical, or sometimes sub-vertical banks, while on the bed, there are accumulations of sediment consisting mainly of coarse carbonate sands of organogenic origin, which are home to distinctive and still little-known fauna. 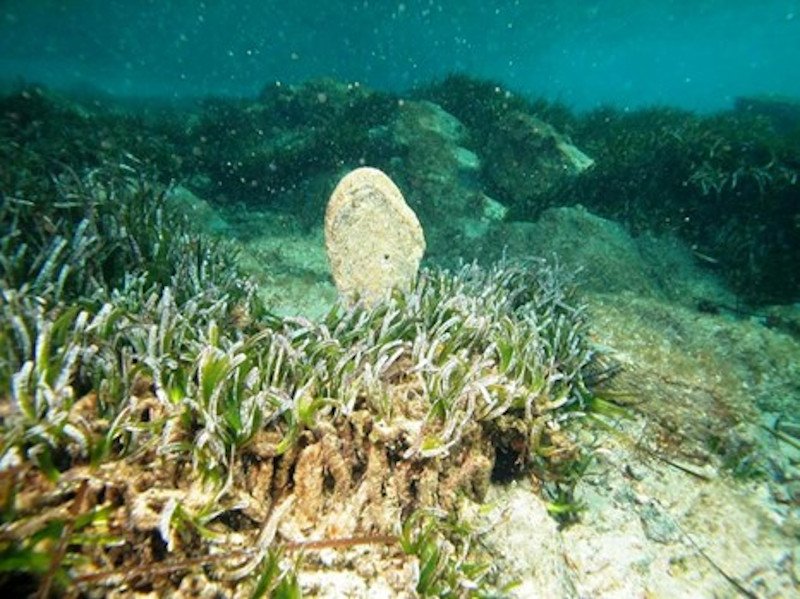 According to studies carried out in the 1970s by Barsotti et al. (1974), the geology of the shoals derives from Tyrrhenian marine sedimentary cycles datable to the Riss-Würm interglacial (around 100,000 years ago), responsible for the deposition and shaping of the so-called fossiliferous ‘Bench’, which is quite similar to the one found on the Livorno coastline and which forms the Secche di Vada. As a result of the Tyrrhenian transgression, a shallow marine environment characterised by an organogenic detrital substrate is said to have been created. The deposition of calcareous sands is thought to have ended in the regressive phase, accompanied by lithification of the sediment and formation of the limestone plateau, giving rise to the so-called “calcarenitic bench” (“beach rock”). 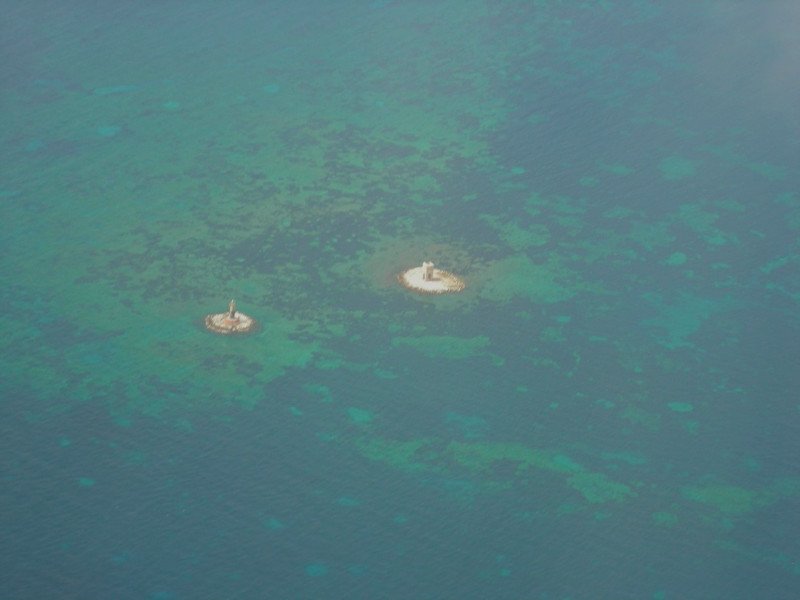 Due to their configuration and position (shallow depth and particular wind patterns), the Secche della Meloria represent a highly hydrodynamic environment – one of the most significant in the entire Ligurian-Tyrrhenian area. According to studies on the subject (Fierro et al. 1969), the circulation of the bodies of water is considerable and varies depending on the season. During the summer months and in good weather conditions, a constant north-south current prevails, which, on encountering the geological barrier of the shoal, splits into two branches: an eastern one, through the channel separating the shoal from the mainland in a direction virtually parallel to the coastline and characterised by high surface velocity; and an western one, flowing offshore and slowing down as it moves away from the shoal. During the winter months, the current reverses its direction, heading from south to north with a two-branch pattern similar to that of the previous months. It is, however, more turbulent and at times stronger, as it is probably more influenced by the marine weather conditions of higher winds and greater swell.

More recent studies (Gasparini et al., 1986; De Simone et al., 1993; Immordino, Setti, 1993; Astraldi et al., 1993a) have confirmed that, in general, the circulation of the area of sea off the Livorno coastline is formed by a dominant current, in certain conditions detectable only at depth, which constantly flows from south to north, with forms of derived currents or detached vortical structures generating both horizontal and surface currents and vertical currents, together with recirculation phenomena in the straits south of Livorno, all due to the presence of the shoal. The presence of a general northward current can be attributed to the fact that at these latitudes, and a little further south, the two basins – the Ligurian Sea and the Tyrrhenian Sea – interface, but are different in terms of thermal characteristics, salinity and therefore water weight. Since the Ligurian Sea is exposed to drier and colder winds, such as the north-westerly winds blowing from the Rhone valley or the northerly winds coming down from the Ligurian Apennines, it has a significantly lower temperature than the Tyrrhenian Sea, which is more exposed to the southerly Sirocco winds from Africa, with a gradient that is accentuated during the winter months. The difference in water density, greater in the Ligurian, lesser in the Tyrrhenian, thus creates a displacement of bodies of water mainly towards the northern basin, and more frequently in the winter and spring periods. During the summer months, when the thermal gradient, and consequently the densimetric gradient, is reduced, exchanges between the two basins are much more limited and sometimes non-existent. In the summer, therefore, the entire area of the Secche is washed by the waters of the Ligurian Sea into which a vein of colder water penetrates from offshore, which, once it reaches the area of the Secche, splits into two streams moving in opposite directions along the coast of Tuscany (Astraldi et al., 1993b). 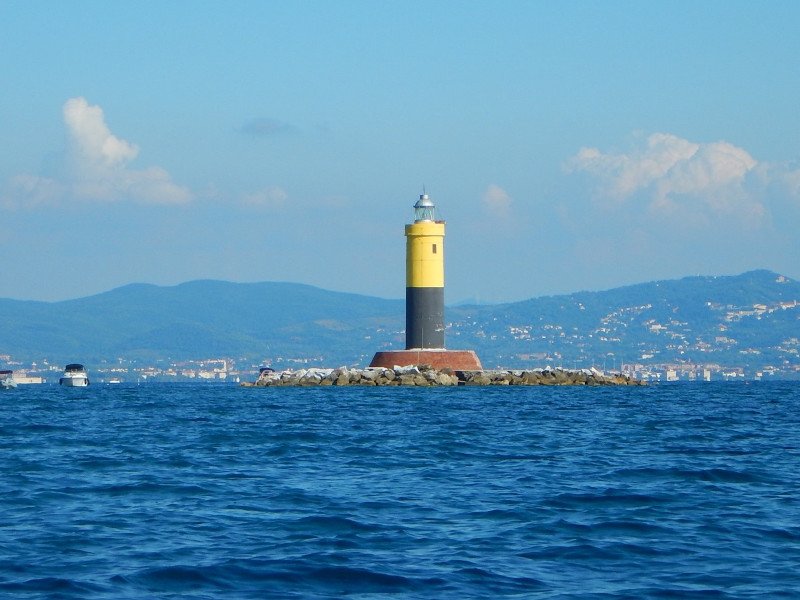